Canadian Women head to Glasgow and the Commonwealth Games! 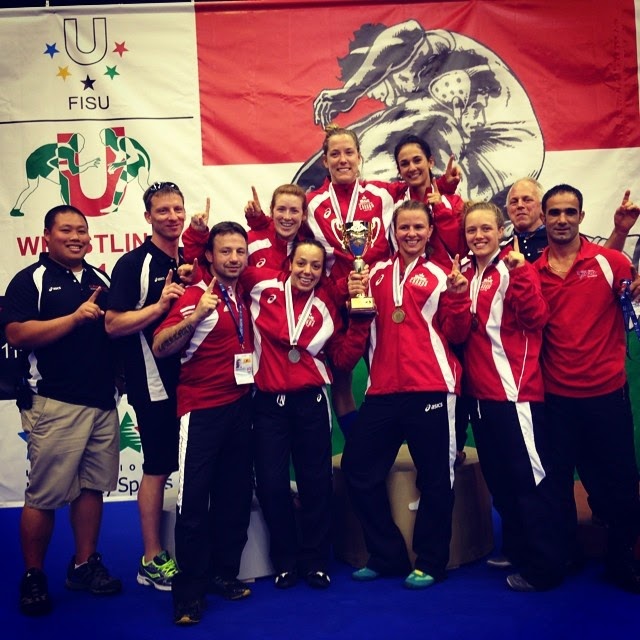 Our women's wrestlers are carrying some serious momentum into Scotland this week for the Commonwealth Games. The past four weeks have been log jammed with events all of which have demonstrated that the Canadian Women will be a serious medal threat this year in Glasgow.

It does not seem like four years ago that our team assembled to participate at the last commonwealth games in New Delhi India. The vivid images of those games still shine brightly in my mind. Whether it was the Swaminarayan temple literally a short walk from the village entrance, the great Taj Mahal, the chaotic city life and traffic, the amazing enthusiastic Indian fans at the wresting venue, or even Arjan Bhullars victory dance up on the mats as he won the gold medal in his families country of origin! I will never forget the memories of Delhi and look very forward to new amazing experiences this week in Glasgow!

I have travelled the world many times over now yet have not been to Scotland. I look forward to experiencing the sights, sounds, and Scottish culture. I know our team is equally excited to get this opportunity! In 2010 the CWGs in Delhi followed the World Championships that year in Moscow Russia, and I know our team was excited yet a little spent following our peak at the Worlds that year. This year the games fall at a more exciting and opportune time. They are a final preparatory competition for our team as we ready for the World Championships in Tashkent Uzbekistan. The games are also a valuable "Major" multi sport experience which will be very valuable for our younger less experienced group of athletes heading toward the Pan American Games in 2015, and the Olympic Games in Rio 2016! With the departure of a few of our past "proven performers" comes an opportunity for Canada to see and join many of our current team members in there quest to be "The Best" wrestlers on the planet! I mentioned our team maybe lacking games experience yet they are skillful and motivated as any Women's Wrestling Team Canada has ever fielded before.

I know the girls are excited to be a productive part of a larger team Canada at the games, and all the members of Wrestling Canada (Men included) will do their utmost to represent Canada with great passion, pride, and intensity!

The Commonwealth offers a field of athletes that we do not always face, like the top wrestlers for Africa. Coach Daniel Igali, had a very athletic and formidable group in Delhi, as did the team from India! We are expecting tough matches from many of the teams in attendance and will not take anyone lightly. Cameroon and Great Britain also boast some top level wrestlers on the women's side.
Our young and talented team are eager to step out on the mat and make their mark wearing the maple leaf as many of our legendary wrestlers have done in the past!

I will blog as regularly as I can (yet our teams preparation and performance will come first as always). I look forward to working with Coaches Tzogas, Ragusa, and Siassouri. Also we will have world class support from our lead therapist Surrinder Budwal, Dr. Dory Boyer, and Alex Davidson as Team leader. We will also have other COC and Wrestling Canada support at our disposal to ensure our athletes have everything they need to focus on the task at hand.

Well I need to get some sleep now. Tomorrow will be a busy day of travel.
Stay tuned...